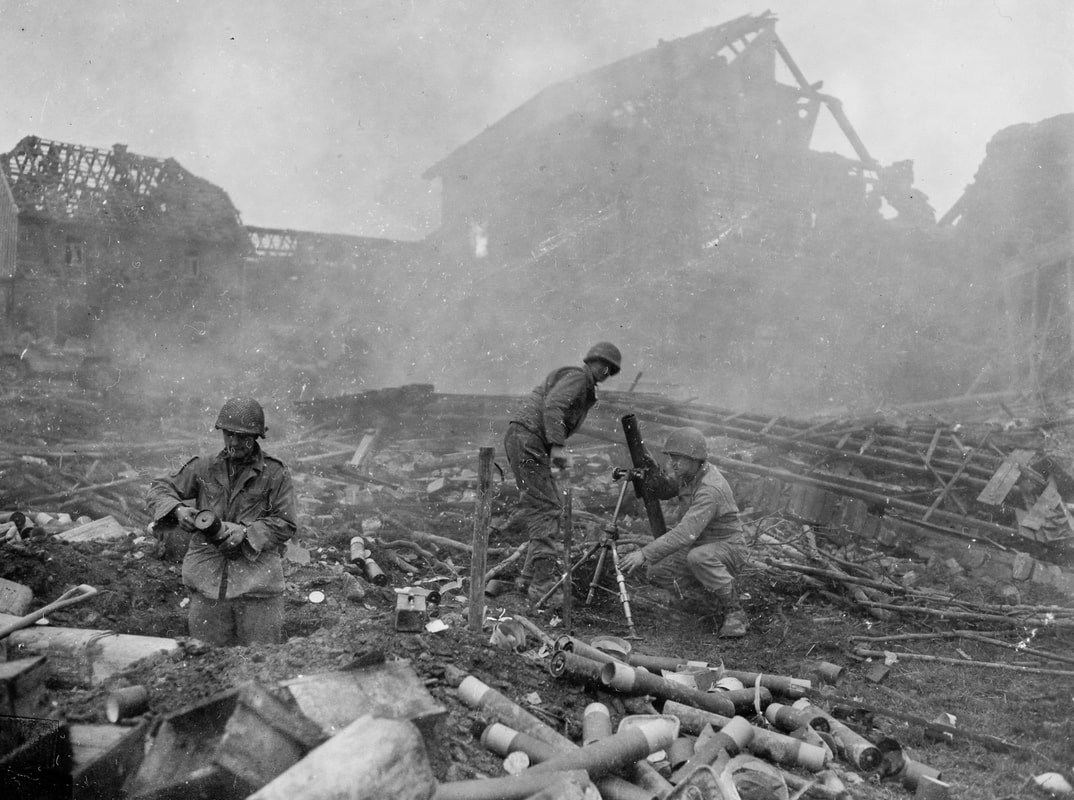 Into the Dragon's Teeth: Siegfried and Hürtgen

Following a 4th Division patrol, which had crossed the German border the evening of September 11, and which was the first infantry division unit to enter Germany, the remainder of the Division crossed in force on September 12. Two days later, the great assault began, and within two or three hours two entire combat teams had driven through the "impenetrable" line and had fanned out on top of the Schnee Eifel, a key terrain feature of this line. With ever-increasing strength, the hostile forces fought off division attacks until, by about September 18, it became clear that they could not break through the enemy. At this time there were only six divisions and a few hundred cavalry troops along the entire First Army sector of the line, from Aachen to the southern tip of Luxembourg. These forces were so spread out (as in the case of the 4th, with its 15-mile front) that exploitation was not possible. Not only was the front wide, but a gap of ten kilometers existed on the right and 40 kilometers on the left.

On September 17, Major General Leonard T. Gerow, on occasion of his temporary relief from command of the V Corps at that time, in a commendation said of the 4th: "The aggressive courage, unselfish devotion, tenacity of purpose and outstanding leadership of all ranks is evidenced by the fact that the 4th Infantry Division has never failed to capture its assigned objectives and has never lost ground to the enemy. You are battle tested, battle wise and a first line combat division, with an outstanding record and reputation. I am proud to have had the opportunity of commanding you in battle, and I shall watch your future successes with the greatest of interest, with the knowledge that victory is assured."

A period of readjustment and waiting set in, characterized by vigorous patrolling, sometimes even flaring up into company battles. The morale of the men of the Division began to ebb as the weather grew worse. Infernal mud, continuous rain, and damp fog made this, the first stable front since D-Day, completely miserable. The division was given a new sector, to which they moved on October 5, just north of the one they had held. Everyone prepared for an attack on October 8. But none came. Throughout all of October, the Division sat, enduring hardships of weather and especially the German artillery. Toward the latter part of the month, Germans sent "buzz" bombs roaring over the heads of the troops. These flying bombs were aimed at Liege and other big cities, but occasionally one fell short. No Division casualties were reported as a result of these deadly gadgets.

In the early days of November, the Division moved north once more and assembled in a forest east of Eupen and southeast of Aachen. This had been a top secret move and the soldiers were expecting to participate in a big attack. For toughness and savagery of fighting, their expectations were filled. The most grueling battle in Europe from D-Day to V-E Day was fought in the Hurtgen Forest, south of the Aachen-Duren highway. With a mission of seizing the main road from Hurtgen to Duren, the 4th Division attacked through this forest on November 16, 1944. The enemy's strength had been completely underestimated.

Before the battle was over they learned that the enemy considered the forest so vital to the defense of the Roer dams, Duren, and the Cologne Plain, that he willingly sacrificed four divisions to stop one American division, and hurled in other miscellaneous units to bolster his crumbling defenses. Hurtgen was a forest of pines and firs, ranging up to 150 feet in height; in many places it was so dense that visibility was reduced to ten yards. To make matters worse, a series of steep ridges and deep ravines extended across their line of advance. With full knowledge of the ground, the Germans utilized all terrain features to the maximum. Extensive minefields and rows of concertina wire backed up by machine guns constituted a formidable main line of resistance. Several hundred yards east, another line lay in their path; further east another, and so on through the forest.

A refreshed Division assaulted the forest defenses on this first day. Never before had men of the 4th fought under such conditions. As the enemy artillery rained down, casualties streamed back. Here more than ever, the place to avoid the greatest mass of artillery fire was the closest position to the enemy, for the enemy didn't want to destroy his own men. Constant rain filled the meager holes the men plunged into for protection against the shells. Both battle and non-battle casualties were extremely high. With the troops continuously exposed to rain and mud, plus the fact that the majority of replacements were not furnished overshoes, there was a great number of trench foot cases. Evacuations decreased as proper footwear was expedited.

Soldier James C. Lindsey recalled: "In the Hurtgen Forest, snow was all over the place, knee deep. There were lots of pine trees. We dug us some good holes, put logs on top with dirt on top of that with just a little opening to get in. My wool overcoat had gotten wet, and I built a fire trying to dry it out. The enemy saw the smoke coming up and fired. I jumped into my hole. The shell tore that overcoat to pieces and put the fire out, and that fire was right at the edge of my hole. You could make it pretty good if you knew how to protect yourself. I believed in holes. I was a good digger. I wasn’t lazy. I guess God thought if I wanted to live that bad, he was gonna spare me. We wore the same clothes while we were in the forest for a month and a half, and we couldn’t smell each other either. A lot of soldiers had problems with frozen feet. We were issued two pairs of innersoles to rotate wearing in our shoes. . . . I remember sometimes laying all day in ditches. The enemy would zero in on us and shoot every tree in half all the way around us. It looked like a tornado had hit, and you couldn’t do anything."

Whereas, two months before, the Division had chalked up gains of as much as 50 miles in a day, now 500 yards was accounted a good day's work. Again and again, valiant battalions were hurled against the Nazi defenses and, with superb fighting, managed to drive over them or work around them. A day's objective would be the next line of enemy bunkers, for there the men could "hole-up" for the night and feel a little safer from the accursed artillery. Step by step the battle line was battered closer to the edge of the terrible forest despite a casualty rate which appalled even D-Day soldiers. More fortunate companies would be brought up to almost full strength by reinforcements; two days later, 50% of the company was left. Objectives were taken and held by companies of 20, 25, or 45 men against the most savage counterattacks the enemy could hurl. Battalion CPs were shelled frequently; one battalion counted a total of four commanders in one day. On one occasion, a complete battalion staff was wiped out by one artillery concentration and officers had to be recalled from the front lines to form a new staff.

The construction or maintenance of a complete road net in the division zone had to be accomplished—a Herculean task. One need only have seen the bottomless mud to realize the extreme difficulty of this work. No one bothered to count the mines removed from roads, firebreaks, and forest lanes, but the number would be appalling because, in single areas, hundreds were buried together. In some cases the mines had been placed four deep. Every imaginable means of coping with this problem was attempted. Flails, mine digging details, and tanks all played their part in removing the deadly weapons. As the infantry emerged from the forest opposite of Grosshau, they breathed a sigh of relief, but there were several bitter days of fighting before Grosshau fell and fanatical enemy counterattacks had finally been defeated.

One of the companies was overrun by a paratroop battalion led by a major, whose mission was solely to counterattack against American units which were making a breach in the enemy's defenses. Before this onslaught had been stopped, the major and his battalion were destroyed, but only after a bitter fight. The horrors of "the Hurtgen" can never be forgotten by the men who were there. Only heroic action by countless individuals and units made the attack a success. There was the case of one hero who had had his foot blown off by a mine. As he lay in agony, some Germans sneaked out and placed a booby trap under him so that when the medics came to him, they would be destroyed. The wounded man remained conscious; and, finally, when rescued 70 hours later, he was able to warn his rescuers of the trap, the wires of which were then cut.

Casualties ran so high and movement through the forest was so hazardous that unprecedented means had to be employed in the evacuation of wounded. Hand-carries of extraordinary difficulty and danger served as the means by which supplies were brought forward and casualties were carried back. When the 4th Division departed from the Hurtgen Forest, it had accomplished its mission—the Forest was behind the American lines and the Hurtgen-Duren road had been overrun. Marching down the roads and back through the forest, the few men who were left of those who had begun the battle one month before saw how the face of "the Hurtgen" had changed; acres of beautiful forest had given way to twisted masses of shrapnel-torn stumps and broken trees. The Battle of Hurtgen Forest had been an "epic of stark infantry combat."

General Collins "saluted" the Division for its part in the Hurtgen Battle with the following statements: "Combat in woods calls for topnotch leadership on the part of small unit commanders and the highest order of individual courage. The drive of the 4th Division across its sector of the Hurtgen Forest required a continuous display of these qualities under the most adverse conditions of terrain and weather. The strong enemy defenses were reinforced by the ruggedness of the hills, and the inadequate road net was continually blocked by mines and fallen trees. As a result, much of the fighting had to be done without benefit of our accustomed tank and tank destroyer support, and for several days some units could be supplied only by hand-carry of food and ammunition while the evacuation of wounded was exceedingly difficult. The fact that the 4th Division overcame these many difficulties and drove the enemy from the dominant hills overlooking the Roer River is a tribute to the skill, determination and aggressiveness of all ranks. It is with keen regret that the VII Corps releases its oldest combat division. But it is with pride and satisfaction that we salute the officers and men of the 4th Infantry Division for its achievement in the Battle of the Hurtgen Forest." For the countless dead, these words meant little.
NEXT CHAPTER