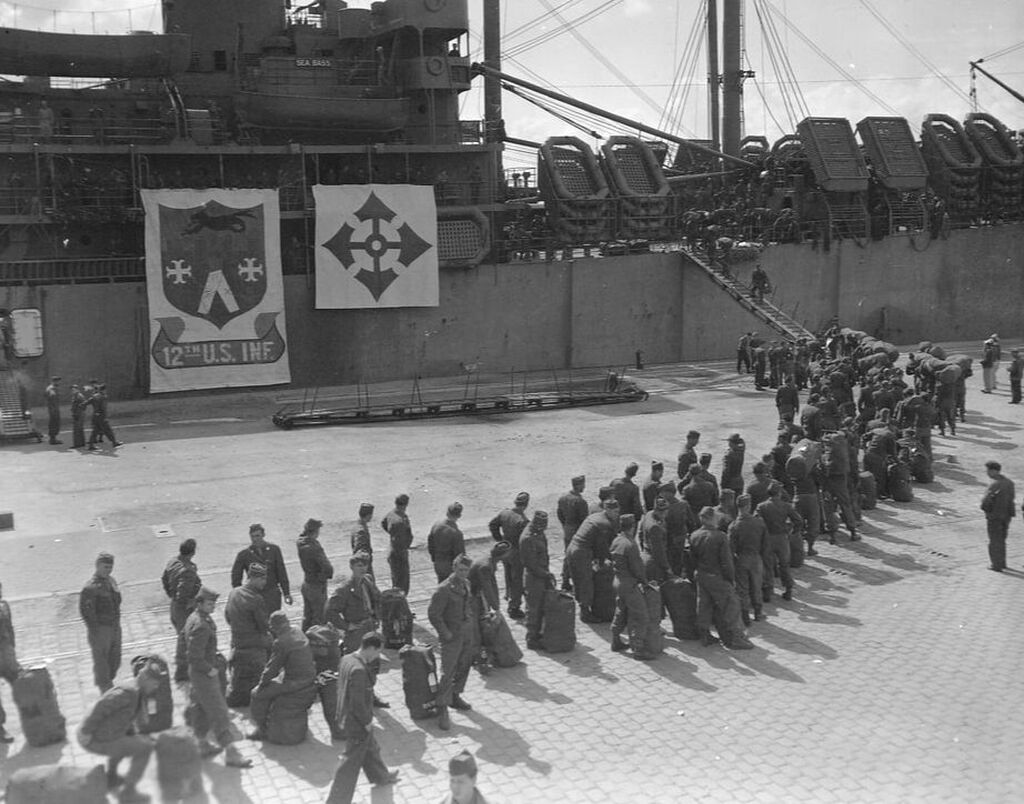 Members of the 12th Infantry Regiment board a home-bound vessel in Le Havre, France on July 5, 1945.

On May 7, 1945, soldier Donald Bench wrote the following in his war diary: "WAR IS OVER. Men sit down and cry just like 2 year-old kids. My thoughts turned to how lucky I have been. I guess the Good Lord had his singer on me." Not all were as fortunate. The unit had moved fast, and had hit hard, but, like many combat divisions, paid a heavy price for its gains. By V-E Day, the "Ivy Division" had suffered 21,550 casualties--second only to the 3rd Infantry Division among American forces in World War II.

The 4th Infantry Division had participated in all of the campaigns from the Normandy Beach to Germany. Personnel of the Division during this period wore the five campaign stars on the European-African-Middle Eastern Campaign ribbon: Normandy, Northern France, Rhineland, Ardennes, and Central Europe. Those who landed with the assault elements of the Division also wore the Bronze Service Arrowhead on this same ribbon.

Following the combat phase of the European Campaign, the Division moved northwestward to an occupation zone around Ambergand again passed to the command of the Third Army. The Division was later moved to the Ansbach area and by May 17 had assumed responsibility, as part of the III Corps, for its new occupation zone within the German regional districts of Oberfranken and Mittelfranken. For the next three weeks, the entire Division was occupied in cleaning and repairing its equipment, guarding certain military installations, operating Displaced Persons' Camps, processing prisoners-of-war, and enforcing military government regulations.

Having received news it was to return to the United States, the 4th moved, on June 10, 1945, to an assembly area in the vicinity of Bamberg, Germany. There, extensive preparations were made for the rail and motor move to the port of Le Havre and the voyage to the United States. While at Bamberg the Division transferred over 2,000 men with point scores of more than 85 to the 99th Infantry Division, and received an equal number of low-point men from that division. At this time it was contemplated these 85-point and above men would soon be discharged while the 4th Division would be redeployed to the Pacific Theater via the United States. On June 18, a Division review was held near Bamberg. The end of June saw the completion of the Division's movement to Camp Old Goid near Le Havre, France. On July 2, the Hermitage, first of the four transports required to ship the Division, sailed with the first group of 4th Division men bound for the States.

It was July 1919 which saw the "Ivy Division" of World War I making the same voyage home. After landing, the troops were shipped to camps near their homes, and given a 30-day period of rest and recuperation. At the termination of this 30 days, the men reported to the 4th's new home, Camp Butner, near Durham, North Carolina. It was here that the Division would receive a few weeks' training, then move to the Pacific Theater. The termination of the war with Japan caused the cancellation of the plan for redeployment of the 4th. This was one change of plans which was approved by all. In the following weeks and months, most of the "Ivy Men," were discharged from military service and began readjusting to civilian life. Some did so with ease; others grappled with past trauma the rest of their days. In any case, the 4th Infantry Division had done its part in the quest to defeat Hitler's legions. To this day, the division's motto best underscores the dedication of its ranks: Steadfast and Loyal.
Online Resources