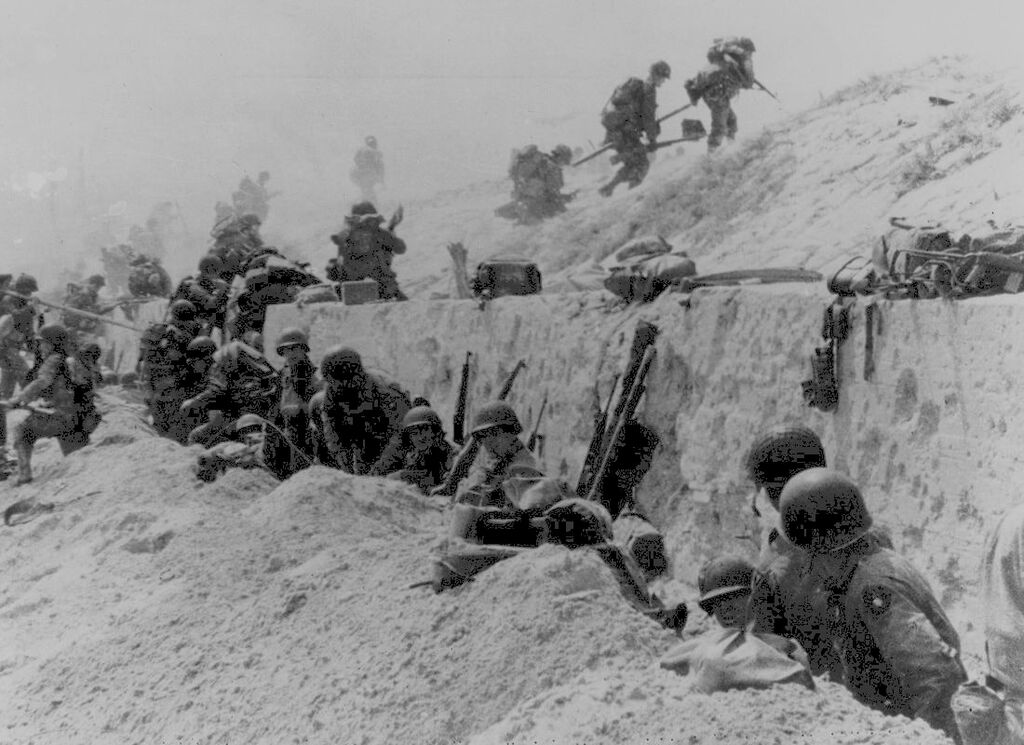 The 8th Infantry Regiment pushes beyond the seawall on Utah Beach on D-Day, June 6, 1944.

After midnight of June 6, l944, the transports slowed until they were barely creeping along, following the mine sweepers, and at 0200, the ships dropped anchor off the French coast. The division was across the channel. But what of the enemy? Soon—the answer! Heavy flak began to go up and grow in intensity—the German greeting to the airborne landings. The fighting had started. Off shore, with a rough sea running and in darkness, the assault waves climbed down landing nets into the bouncing LCVPs. Allied planes were pounding the beaches; the orange bursts and crack of the bombs could be seen and heard from the ships. It went on through the dawn. Then the naval barrage thundered down from battleships, cruisers, and destroyers. At the same time, the first assault wave swung into line and headed for Normandy shore.

Landing at 0630 (H-Hour) on a stretch of the French coast named, for this operation, Utah Beach (Utah Beach is 2 miles east of St. Martin-de-Varreville and 6 miles from Ste. Mere Eglise), the assault units pushed inland as rapidly as possible to reduce the enemy positions behind the beach and to avoid the enemy shells which were beginning to rain down upon the beach. Beach defenses of underwater mines, barbed wire, trenches, machine guns, 88mm artillery, automatic tankettes (carrying 300 pounds of TNT and designed to follow runways and crash into our troops), and forts with l50mm and 2l0mm guns lay ahead. To increase the hazards of landing, the enemy had flooded the area just behind the beach up to a width of 2,000 yards.

“I am ashore with Colonel Simmons and General Roosevelt, advancing steadily. . . . Everything is going OK. . . . Defense is not stubborn.” These were the words transmitted by James Van Fleet, 8th Infantry Regiment commander, to his superior Raymond “Tubby” Barton on the morning of June. Despite the calm demeanor of Van Fleet’s communication, many veterans of the Ivy Division would admit that their D-Day experiences were anything but placid. Even so, matters could have been far worse—especially in comparison to Omaha Beach to the east.  In a fortunate blunder, the troops of the Fourth accidentally landed on a section of the beach that was comparatively lesser defended. The “Ivy Men” were prompt to take advantage of the error.  Sustaining the least number of casualties of all five invasion beaches, these infantrymen quickly sought to link up with the U.S. paratroopers dropped into the French countryside the night prior.  Of the some 21,000 men who waded ashore, less than 200 of them became casualties on D-Day.  Greater death tolls awaited the division just beyond the sandy dunes.

According to historian Joseph Balkoski, “Although the assault on Utah Beach ultimately became one of the most successful military operations of World War II, its outcome was anything but certain. Not only was Utah the most isolated of the five D-Day beaches, but the airborne assault was of unprecedented size and complexity. Despite the perils, American troops confidently cascaded into that far corner of Normandy and contributed decisively to the Allied triumph on D-Day.”

Like all battlefields, geography and terrain were crucial factors for Allied planners and common GIs alike. “Utah Beach, located directly east of Sainte Mere-Eglise, is a smooth beach with a shallow gradient and compact grey sand between high and low water marks. It differs from Omaha in that the terrain along the shore is not high; there is no dominating ground to assault and secure,” wrote Army historians fifty years later. Even so, the soaked GIs wading ashore were in for one of the most memorable episodes of their young lives.

Combat medic Jack Fox was a member of the division’s 8th Infantry Regiment. Slogging up the beach amidst thunderous German artillery fire, he later recalled, “I remember the bullets flying over our craft and see the ricochets of the bullets hitting the water. The landing craft’s door fell open and we all ran into the surf. We were in very deep water and I thought I was either going to drown or be shot before getting to land. By the grace of God, I made it ashore and started running through the deep sand toward the seawall. I had saved my medical equipment and stopped to help a wounded soldier lying on the beach. I turned him over and realized he was dead. I recognized him as a friend of mine. I was shocked, scared and angry at the same time.”  Despite these traumatic personal losses, the division continued its advance inland.

Wishing to capitalize off this momentum was Brigadier General Theodore Roosevelt, Jr. The ambitious son of the warrior president and armed only with a .45 Colt and a wooden cane, the arthritic brigadier defiantly exclaimed to his officers, “We'll start the war from right here!” For seizing the moment, Roosevelt was awarded the Medal of Honor—posthumously. The fatigued Roosevelt died of a heart attack one month later.

Only a few roads ran inland, and it was down these causeways that the American troops advanced. It is almost impossible to imagine the fever pitch of excitement that had arisen in these men. Always the drive must be inland—to push the enemy back so as to create a steadily enlarging beachhead. Surprisingly few losses were sustained initially, but they began to mount at an increasing rate as enemy artillery swept the beach. One vital mission of the 4th was to contact the 82nd and 101st Airborne Divisions, which had dropped west of the inundated area and around Ste. Mere Eglise.

Leading elements made contact with these paratroopers and reinforced them around Ste. Mere Eglise, as succeeding troops advanced straight in, then flanked to the north on an operation which would eventually cut off the Cotentin Peninsula and roll up the coastal defenses. A terrific fight developed, in the center of their drive, around the town of Emondeville. This town and Azeville were two strong points the Germans hoped to hold in a desperate attempt to prevent the beachhead from growing. North of these towns the enemy had formed a line running through the towns of Montebourg, Quineville, and Ozeville.

As these defensive positions were overcome and as the enemy was pressed further away from the right flank of the VII Corps bridgehead, other divisions were sent on a drive which sliced across the Cherbourg Peninsula. Upon the successful conclusion of this phase, three infantry divisions began the final plunge for the port of Cherbourg. On the left was the 9th; in the center, the 79th; and on the right, the 4th. By this time a large number of the Germans in the Cotentin Peninsula, realizing the gravity of the situation, began to withdraw to Cherbourg. They planned to make a last ditch stand to prevent Allied use of the harbor.

On June 19, the final drive on the city began and moved rapidly, reaching Rufosses, about nine miles north of Montebourg, in two days. By June 25, the division was at the outskirts of Cherbourg and during the night entered the city from the east. During the 24th and 25th, one regiment alone captured over 1,500 prisoners. For the next several days, mopping up operations were required to clear the strong forts guarding Cherbourg harbor and those along the coast east of the city.

Thus ended the first battle of the 4th Division in World War II; it had performed its mission and performed it well. Recognition of its achievements in this campaign came from Maj. Gen. J. Lawton Collins, VII Corps Commander, in a letter to Maj. Gen. Raymond O. Barton on July 2, l944. Gen. Collins stated: "The 4th Infantry Division made the initial landing on Utah Beach, broke through the stiff German resistance there, and, in conjunction with the 82nd and 101st Airborne Divisions, succeeded in establishing a firm beachhead which was the basis for future operations." The establishment of a junction with the 82nd Airborne Division in the vicinity of Ste. Mere Eglise was one of the critical factors in the success of their initial operations.

Thereafter, the division successfully captured the town of Montebourg and the Quineville Ridge and outflanked Valognes from the east. They continued north, culminating in the capture of the high ground east of Cherbourg and the seizure of the eastern half of Cherbourg itself in conjunction with the 79th Division. The division was in continuous action during the period June 6-28 when the last resistance east of Cherbourg was eliminated. During this period, the 4th Infantry Division sustained over 5,450 casualties and had over 800 men killed in action. These relatively severe casualties are a mark of the stern resistance that were overcome, and is a tribute to the devotion of the division that these losses, in no way, deterred their aggressive action.
NEXT CHAPTER