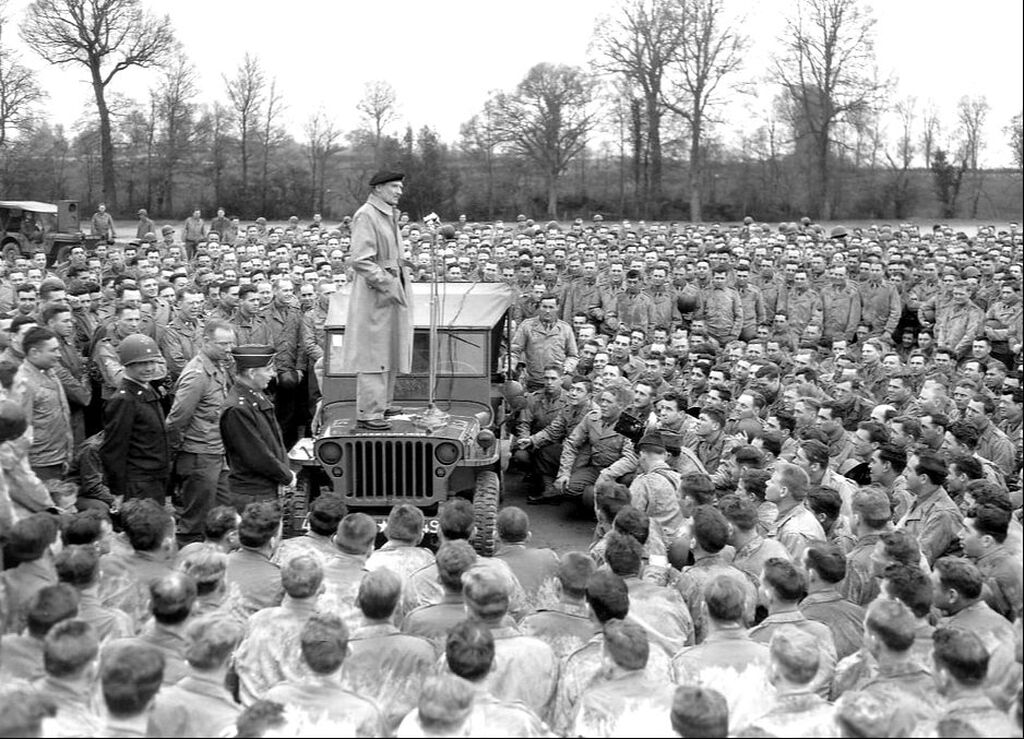 Sir Bernard Montgomery addresses troops of the 4th Division in England on April 14, 1944. Generals Raymond Barton and Theodore Roosevelt, Jr. are at left.

Life in England: Countdown to D-Day

As the year 1944 opened, the Division moved to Camp Kilmer, New Jersey, a staging area of the New York Port of Embarkation. This last alert "took," and on the morning of January 18, 1944, the 4th Infantry Division put to sea. On January 29, their convoy entered the port of Liverpool, England. Within minutes of landing, the mark of the enemy was plain for all to see as troops marched from ship to train through block after block of bombed out homes, warehouses, and docks. The Division was established in scattered villages in Devonshire, with the Division Command Post at Tiverton, near Exeter. Even before unloading had been completed at Liverpool, the Supreme Commander of the Allied Expeditionary Force, General Dwight D. Eisenhower, and his deputy, Air Marshal Sir Arthur Tedder, visited the 4th Infantry Division.

This was but the first in a series of inspections by distinguished British and American higher commanders. The Ivy Men made welcome additions to the Division family, in the form of the 70th and 746th Tank Battalions, the 65th Armored Field Artillery Battalion, the 406th Engineer Group, the 377th Anti-Aircraft Artillery (Automatic Weapons) Battalion, the 87th Chemical Battalion Motorized, and the 801st and 899th Tank Destroyer Battalions, which would be with them during the assault and, in some cases, for many months thereafter. For the actual assault the 1st Engineer Special Brigade would support the Division; therefore personnel of this Brigade were participants with them in the planning phase and landing exercises.

The general operation against Hitler's Atlantic Wall was now crystallized, and the target date determined. For each hour there was a specific job, representing an essential step in preparation for readiness on that target date. Slapton Sands, along the south Devon coast, was cleared of civilians. Water covered an area in rear of this beach and resembled closely the water obstacle prepared by the Germans, who had flooded the area in rear of the Normandy beach. Here, landing rehearsals, complete with naval fire support and German air and E-boat opposition, were held many times. The division's first casualties from enemy action were sustained in the course of this final rehearsal in early May, when E-boats hit under the cover of darkness. Their first German prisoner was also captured during this preparation—an enemy airman who was shot down over the assembly area.

Each move to the ports for these rehearsals had been made under complete security restrictions. The final move, during the third week of May, differed in no essential feature from those made previously. Yet it was an insensate man who did not realize that "this is it." Arriving in the marshaling areas, units found the areas surrounded by barbed wire and, once inside, none were permitted exit or contact with any outsider, civilian or military. "Briefing" began. United States forces were to attempt landings on two French beaches, one under VII Corps, and the other under V Corps. The assault division in the VII Corps plan was the 4th Infantry Division, while the assault element of V Corps, on VII Corps' left, was the 1st Infantry Division, reinforced by one regiment of the 29th Infantry Division. A third beach was to be assaulted by British forces, to the left of V Corps. By reason of the tide along the Channel coast, the first troops to land would be those assaulting the beach nearest Cherbourg—the 4th Infantry Division.

The mission of the Division was explained; the job for which each man had been prepared was fixed in relation to a given piece of Normandy beach. Models of the assault beach were studied; gas proof clothing issued; waterproofing of vehicles and equipment accomplished. During the first few days of June the troops loaded onto ships for the final pay-off run.

The fleet departed from four ports into the English Channel and headed toward the coast of France, shepherded by the combined strength of the British and American fleets, and with the air forces fending the enemy from the sky overhead. History assigns few men of any generation a role in so fateful an enterprise. To add to this already tense scene was a decision by General Eisenhower and transmitted to the convoy, postponing the assault for 24 hours in the hope that high seas would subside. So, thin fingers of the assault forces turned back mid-Channel to close into already crowded ports or lay off shore until, a day later, the movement was resumed. The transports again sailed for the French coast. This time, there would be no turning back.
NEXT CHAPTER