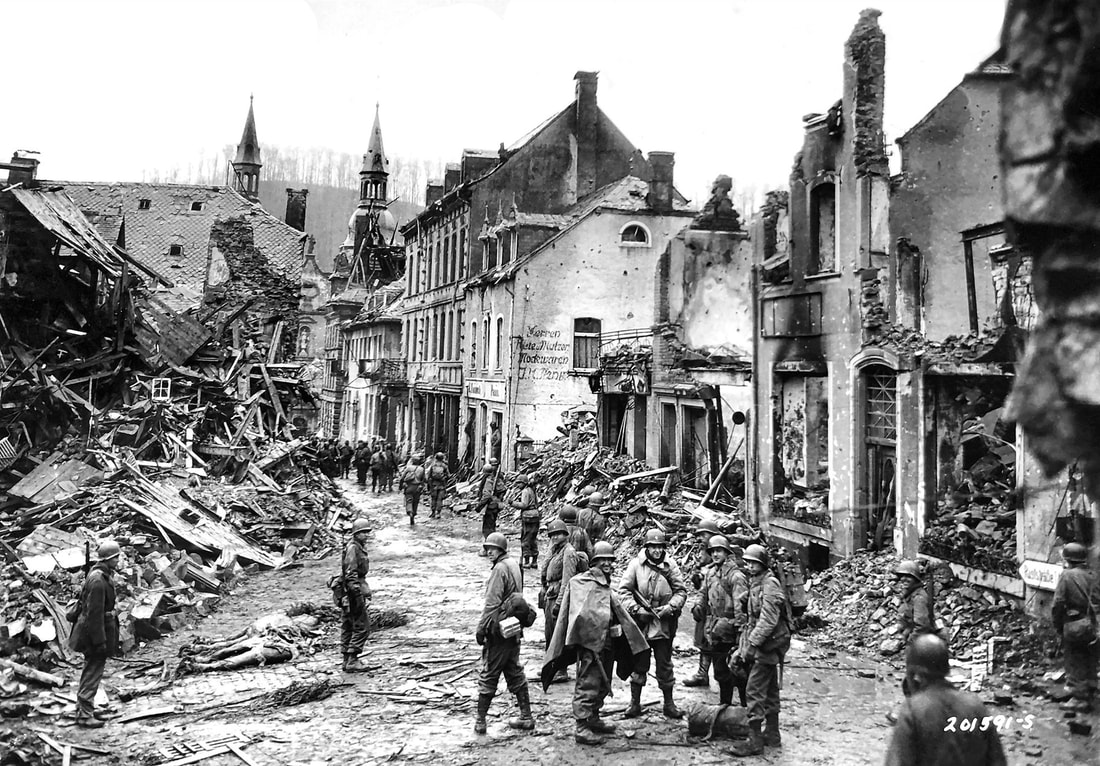 GIs of the 4th Infantry Division mingle in the ravaged streets of Prum, Germany on March 1, 1945.

When the German counter-offensive in the north had just about reached its zenith, American troops were ordered to attack the shoulders of the "Bulge," which extended far into the lines. As part of this operation, the 4th Division made an assault crossing of the Sauer River on January 18, 1945, and drove north to the town of Vianden, in an attack which lasted only a few days.

Upon the transfer of the Division from the XII to the VIII Corps on January 28, General Eddy commended the Division with the following statement: "Five days after the Germans had launched their counter-offensive in December l944, the 4th Infantry Division came under the command of this Corps. We found, upon our arrival in Luxembourg, a Division battle-tired and badly depleted in fighting strength, but a Division of toughened veterans whose punishment against overwhelming odds during the few preceding days had served only to arouse them to a fierce and aggressive fighting pitch. The manner in which your Division recovered itself, established strong defensive positions, reorganized, and retrained until 17 January 1945 was little short of remarkable. On 18 January you participated in a coordinated attack to clear the enemy from his positions west of the Our River, a mission requiring a crossing of the Sauer River in the face of stubborn enemy resistance and bitter weather conditions of ice and snow. Your execution of this mission was a highly commendable demonstration of sound tactical planning and bold courage by a division who knew its business."

Following a change of plans the Division was relieved, and during the last days of January it moved northward from the country of Luxembourg, and, marching through Bastogne, prepared to attack the enemy in the Our River area. Once again we advanced across southeastern Belgium, and by the fates of war returned to the exact sector through which, four and one-half months before, the Division had fought. What memories the names of Bleialf, Schnee-Eifel, and Brandscheid brought back!

Those memories were richly augmented before new battles were over. The route to this familiar battlefield led through the vast "Battle of the Bulge" area; a battleground over which the tide of war had passed so many times there was no wonder that many thousands of Americans and Germans lay half-buried in the snow. Hundreds of destroyed American tanks bore mute testimony that we had lost heavily in this battle; and thousands of destroyed enemy vehicles proved that the German gamble had failed. The fact that the network of roads through this area was already in bad shape could not be surprising. Too much equipment had passed back and forth over these roads in the dead of winter. Later, this contributed to the slowing of our offensive toward the Rhine.

Once again we drove straight to the German border; once again our assault waves crossed the "Skyline Drive" and bore down upon the Siegfried Line. This time a sneak night attack by one regiment penetrated the Line; and the identical maneuver used against Brandscheid once before proved successful again, as infantry, with fixed bayonets and supported by tanks and tank destroyers, overran the town in a charge. A counterattack next day by a battalion of Germans was only fought off by a supreme effort. Through the filthiest area the men had ever seen (dead humans, dead horses and cows, and twisted wreckage of convoys littered the area), the attack was pressed to the Prum River.

There we halted, and for two weeks sat waiting for supplies to be brought up so that the attack could be renewed. Roads were so battered that supply was made by air for a portion of this period. The wait ceased on March 1, as infantrymen dashed across improvised footbridges to the other side of the Prum River, and in nine days reached and captured Adenau. Nine hectic days they were. The land between the Prum and Kyll Rivers was defended by the German 15th Parachute Regiment, composed largely of extremely fanatical young men who fiercely resisted our advance. The quality of their resistance can best be explained by saying that they did not quit until they were killed. Even when confronted with overwhelming odds and when completely cut off from retreat, these men would not give up. Their strength was not sufficient to stop us, but their persistence caused many an unexpectedly severe fight. A task force under Brig. Gen. James S. Rodwell, the Assistant Division Commander, made the final lunge to Adenau after the Kyll had been crossed, and our mission was accomplished.

After 199 days of consecutive contact with the enemy, the 4th Division passed to the command of the Seventh Army, and moved by motor and railroad to the vicinity of Luneville, France. Here the Division Artillery, 70th Tank Battalion, and 610th Tank Destroyer Battalion were attached to other units, while the remainder of the Division rested. Then followed several days of waiting, expecting to be ordered to move north and fight through the Siegfried Line again.

Due to the Third Army's rapid push, this was unnecessary. On March 29, the 4th began crossing the Rhine River at Worms, and launched an attack through Germany which moved so swiftly it can best be characterized as a pursuit. Initially, the greatest difficulty was in the negotiation of the ridges which ran at right angles to the path of the Division. The question constantly arose as to whether it would be better to follow the more difficult procedure of crossing the ridges, or to drive down the long and extremely winding roads. So rapidly did our troops move that the enemy could seldom hold in one locality for more than a few hours. Moving eastward, the Division drove to the outskirts of Wurzburg, and crossed the Main River in order to prevent enemy escape from the city. While one regiment carried out this operation, the other two attacked a fiercely resisting core of enemy troops which had centered on the right flank of the Division.

When this enemy had been either destroyed or forced to flee, the "Ivy" Division resumed its advance, this time to the south. Bad Mergentheim, Rothenburg, Crailsheim, and Aalen were captured. Our greatest problem was not the enemy troops, but the blown bridges and the road blocks. Occasionally, a fairly intact German unit would stand and fight, and fierce battles raged before their resistance was overcome. On the whole, however, the enemy preferred to surrender or flee. At Lauingen, we crossed the Danube River on April 25, and almost immediately increased our pace to better than ten miles a day. The German troops on the southern outskirts of Munich were overrun by the Division and the city fell shortly thereafter to other divisions. The number of German prisoners captured increased almost daily until nearly 50,000 had been processed by the Division in the five weeks following the crossing of the Rhine.

Hatred for the Germans, which had somewhat subsided as the fighting became easier, flared up anew at the sight of the victims of the atrocities in the German concentration camps. When word finally came to halt our advance, that the enemy was ready to capitulate, forward elements of the Division had reached Bad Tolz, just six miles from the Austrian border.

The 4th had fought this last campaign as part of the XXI Corps, commanded by Maj. Gen. F. W. Milburn. General Milburn commended General Blakeley and the Division in the following words: "On March 29, 1945, your Division crossed the Rhine River in the vicinity of Worms, Germany, and in its rapid advance captured Bad Mergentheim, Rothenburg, Crailsheim, and Aalen; crossed the Danube River on 25 April l945, established a bridgehead over the Lech River, and then, in its advance to the east, captured two bridges over the Loisach River and one over the Tsar River. These are accomplishments in which your entire command may justly take pride, and are a reflection of your superior leadership and of the fighting spirit of your men." Nazi Germany’s days were numbered.
Next Chapter